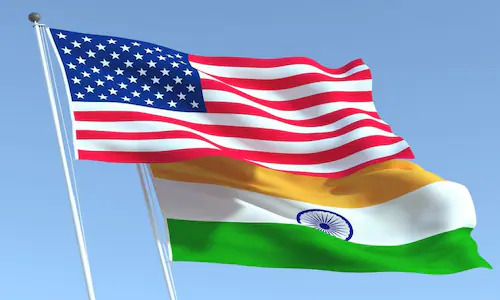 India’s $5.43 billion S400 Triumf Surface to Air Missile (SAM) defence deal with Russia has stirred a hornet’s nest with the US. As the deliveries of the S-400 began this month, there have been widespread speculations of the US imposing Countering America’s Adversaries through Sanctions Act (CAATSA) on India. While the US has imposed CAATSA on Turkey (a NATO ally) and China, applying the same to India would require diplomatic and geopolitical tact.

With the news circulating that Russia and India are further negotiating deals related to the more advanced S-500 missile system, it is imperative to understand if the US will sully its relations with India. Ironically, this deal comes at a time when US-India relations are strong and collaborative.

CAATSA Act was passed in the US in 2017, especially due to the supposed involvement of Russia in the 2016 US presidential elections. The Act champions sanctions on any country that has defence or intelligence ties with Russia. Since the S400 defence deal with India came to light, US lawmakers have been firm that India should be made aware of the extent of CAATSA before the delivery begins. However, with the first delivery made and no sight of the sanctions against India, the following factors seem to be holding the US back.

Firstly, the US realises that India has a two-front hostile neighbourhood with Pakistan on its west and China on its north and east. China and India have already been engaged in a protracted border standoff in the Ladakh region (India’s northernmost point) since 2020– recently, China deployed S 400’s in the airbases along the Tibetan border, a grave security threat to India. What would help the situation is US mediation and a public stand to assuage the Indo-China situation – something that the Western power is not willing to do so openly. Hence, the US has to find another convincing argument for India to stop it from deploying S 400 as a defensive measure.

Another major factor that the US often overlooks is that Russia has been India’s defence partner for decades. To date, India is dependent on Russia for various aspects of defence, including training and maintenance. The American lawmakers have to view this S400 deal in light of India’s decades-old partnership with Russia and the easy accessibility to the latter’s products.

Notably, this deal for the acquisition of five S400 defence systems was signed between Russia and India in 2018 when the CAATSA framework was still not well defined. Then, in 2019, India made the advance payment to the Russian firm Rosnet for the deliveries. During both times, the US did not really ‘warn’ or allude to India regarding the CAATSA. Despite token threats of sanctions from then-President Donald Trump, the US largely maintained an ‘agreed’ silence during the nascent stages of the deal.

Moreover, sanctions against India by the US can push the former more toward Russian defence acquisitions, which can hamper the US defence sales in India. This is a delicate bridge that the US has to cross – it is trying to moderate its reactions to not sway the bilateral relations to the other side. Currently, the US views India as a strong defence partner – while the defence sales of the US to India were insignificant earlier, it has reached $20 billion in the last 20 years. In 2016, the US designated India as a strategic defence partner. On the other hand, Russia’s defense trade with India has reduced, especially in 5-10 years. Hence, the US has to weigh its options against India regarding sanctions well.

As recently as September 2021, there was a renewal of discussions around the Quad security cooperation, and US President Joe Biden hosted the leaders (India, Australia, Japan) of the Indo-Pacific Quad at the White House. There has been additional support by three Republican senators to an amendment to the National Authorization Act for Fiscal Year 2022 that makes a strong case for not applying CAATSA sanctions on Quad members. There have also been reports of the formation of another cooperation group called the West Asia Quad (comprising India, Israel, UAE) whose primary focus will be economic matters (however, the details remain vague). In addition to countering China, India and the US are engaged in other key business areas, including combating the pandemic and vaccine diplomacy, defence hardware market, Fintech, IT/ITeS, cybersecurity and others. With so many collaborative areas between India and the US, it will get difficult for the latter to dent the relationship based on a select defence deal with Russia.

A week since the first delivery began to India and more than three years since the S400 deal was fructified. While India has limited options due to the Chinese threat, the US also is in a geopolitical dilemma. India is not Turkey or China – the US realises that from an economic and a geopolitical standpoint, invoking CAATSA on India would mean going back over twenty years. It took five US presidents and two decades to get the US India relations on track after the Western power had imposed sanctions on India due to the 1998 nuclear tests in Pokhran. Since then, much has changed – in the race to ‘punish’ (however small that might be) India for a defence deal with Russia, the US cannot allow China and Russia to gain geopolitically.

The US is still mulling the extent of CAATSA waiver and embargoes on India – the officials keep reiterating that there is no country-specific provision of waiver against CAATSA, and yet it values the strategic alliance with India. However, not levying any sanctions against India could send a wrong signal against CAATSA to the world; hence the US President might have to balance this case out by calibrating the extent of sanctions. Russian President Putin’s upcoming India visit with the agenda of tabling a deal of S-500 and S-550 systems will further test how the US will navigate the imperatives of geopolitics, market forces, and credibility of its domestic law.

US withdrawal from Afghanistan: Will anything collapse?